Feature Walters is pleased to share that our Columbia Manhattanville’s, Jerome L. Greene Science Center project, has received quite a bit of industry recognition. The New York Times recently published its Best Architecture in New York of 2016, naming The Jerome L. Green Science Center on this prestigious list.

Our scope on this project was subtle yet integral to all the public spaces in this building; the first of Columbia University’s ongoing campus expansions into Harlem. The Renzo Piano Workshop designed building has a transparent façade, with stairs, bridges and gathering spaces visible from interior atriums as well as from the street. Our AESS stringers, guardrails and slab edge systems trace their way through the building as continuous ribbons; winding up 10 stories in the exposed egress stairs; and wrapping their way through the 10-story atriums and around the perimeter slabs facing onto the street.

With over 1,500 treads spread through dozens of unique stairs, eight AESS bridges stacked in the 10-story atrium and over one mile of guardrails, it has taken a tremendous effort of will to build and maintain momentum and continuity through design, fabrication and install. Walters Inc. contributed with the pre-fabrication of the bridge modules, and Metropolitan Walters performed the install. Feature Walters is very proud to have made a significant contribution to a significant, world-class project.

Here’s a promotional video that shares more about the Columbia Manhattanville Campus in its entirety. 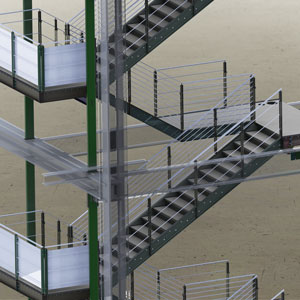