Feature Walters (FEWA) was awarded the Lobby Feature Stair at the Texas Scottish Rite Hospital for Children in April 2017. FEWA’s role involves design assist to develop a 12 metric ton steel structure for an unsupported 720 degree spiral stair, as well as compact, concealed splice details allowing the stair to ship as pre-fabricated modules. Shortly after being awarded the steel, FEWA was asked to also engineer, detail and supply the glass treads and glass guards.

The stair structure will be concealed in drywall cladding, except for the AESS tread supports and SS risers. The stair and lobby ﬁnishes are predominantly white, but the glass treads are a spectrum of bright, crayon colours that are only revealed as you approach, or stand below the stair. Each tread is a colour matched ceramic frit, with ﬂush-mounted point support hardware. Every step up the stair is a translucent glass rainbow – a sure ﬁre way to brighten any patient’s day.

The complexity of the stairs is unique in this scope as the entire stair’s 720 degree of rotation is completely cantilevered from a concealed backspan structure at the L2 slab. Our FEWA plant has started to fabricate the six segments that make up this two-storey high curved stair, and has also started to trial ﬁt them as each segment becomes complete. This project is FEWA’s ﬁrst job in Texas and is expected to be ﬁnalized by mid-December.

Feature Walters is pleased to be a part of this project with General Contractor and our Partner; Beck and Basden Steel respectively. 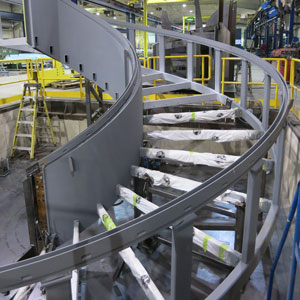 It’s Been Quite A Year!