Lending a Helping Hand in Haiti

Richard and Doug were part of a team brought together through EllisDon’s corporate sponsorship of Empower Global, a charity that helps impoverished countries create sustainable livelihood. Walters supported Richard and Doug’s paid leave to participate in the project.

During their two week stay, the Walters team focused on building a roof for a training facility that helps locals in trades and agriculture. The building will allow locals to learn trades that will empower them to build a sustainable future. The team also helped to build a generator building. The team was incredibly humbled by learning more about the Haitian way of life and felt honoured to be able to contribute their time and skills in a way that would make such a significant impact on the community’s way of life.

Upon returning, Kurt Frers, President and CEO of Empower Global Inc. sent a note of thanks to the EllisDon team including these kind words:

“Wow….. You guys turned more than a few heads with all that you accomplished in such a short period of time!! Many of the locals as well as the local missionaries were “shocked” at the speed at which you got things done … And the way the team worked together so effectively. A powerful example of teamwork and commitment to completing a project!” 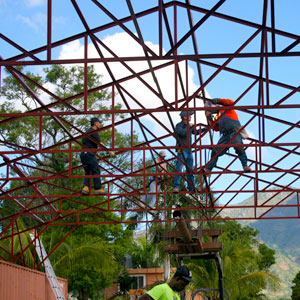