Hope in the City

Walters was honoured to be a Speaker Sponsor for the third annual Salvation Army Hope in the City breakfast, held at the Sheraton hotel in Hamilton.

Rex Murphy, CBC radio personality, commentator and author, served as the keynote speaker at the event. Speaking before about 300 people, Murphy was poignant, charismatic and true to his style – hilarious – in his commentary, much of which focused on the Salvation Army’s place in Canadian society.

The Hope in the City event was also the official launch of the 124th National Salvation Army Christmas Kettle Campaign in the Hamilton and Halton Regions. “The Salvation Army is the embodiment of the impulse to offer help – it is the impulse of the heart to help those in need.” Murphy said. “Among the many charities I see, this one keeps its innocence. It doesn’t clamor for the wrong kind of publicity, it does things quietly and modesty in keeping with actual ideals of charity.”

It was a privilege to be a part of the event and to have a team of Walters employees in attendance.  We are grateful to the Salvation Army for providing support to hundreds of people in need throughout our community. 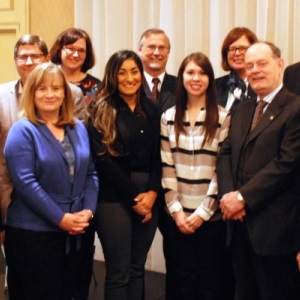 A Starry Night at the CCE Awards