For the National Music Centre (NMC), last Friday marked a significant milestone: the installation of the final beam to its new $168-million facility. The five-floor, 160,000-square-foot Centre is scheduled to open in the Spring of 2016, and will be bringing an architectural excitement to Calgary’s East Village neighbourhood.

“This is a major milestone for the realization of the National Music Centre,” said NMC President Andrew Mosker. “We’re on budget and certainly have momentum — seeing is believing”.

The installation of the final beam was met with lots of celebrating at the Topping Off Ceremony. Almost 200 people were in attendance to witness the beam being hoisted up into place.  As Walters role has been to supply, detail, fabricate, and erect all of the structural steel required for construction of the façade and the stairs, this event was extremely rewarding for our crew on site.

Walters had an opportunity to chat with Michael Brown, president of the Calgary Municipal Land Corporation, and he stated that “the National Music Centre is a vital component in transforming the East Village and witnessing the final beam going up was powerfully symbolic.”

“Walters understood just how important this building is to Calgary and met all the structural challenges ahead of them – and they delivered,” said Brown. “I worked alongside Walters on the Bow building project too – Walters is a big part of building Calgary”.

The NMC will be a showcase for a host of over 2,000 musical artifacts, one of which will be the Rolling Stones Mobile recording truck that was instrumental in producing a host of iconic rock records. 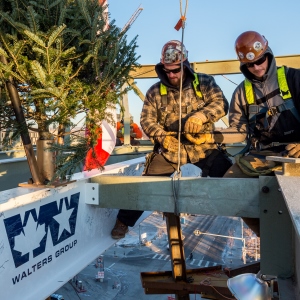 Hope in the City