We’re thrilled to be part of providing a site tour of this incredible project on March 26th as a part of the 2014 NASCC Steel Conference. The Queen Richmond Centre West is an extremely unique building project that is featured on the cover and in a feature article of the March edition of Modern Steel magazine.

To accommodate an incredibly tight site, the project called for an 11-story reinforced concrete office tower to be perched atop of three, 70-ft-tall architecturally exposed structural steel (AESS) “delta frames.” This also allowed for the adaptive re-use of two existing heritage buildings. The construction site tour and presentation will focus primarily on the design and construction of the delta frames, which feature massive 35,000-lb cast steel nodes. Also discussed will be the “table-top” steel platform, which was designed to integrate with the reinforced concrete tower above. The delta frames are primary elements of the gravity and lateral force resisting systems for the building. Due to the extreme magnitude of loading, the delta frame members and cast nodes are concrete filled for composite action while intumescent coating provides fire resistance.

The site tour is currently sold out, but conference attendees can add their names to a waiting list for the tour by visiting the registration desk on-site at the conference. 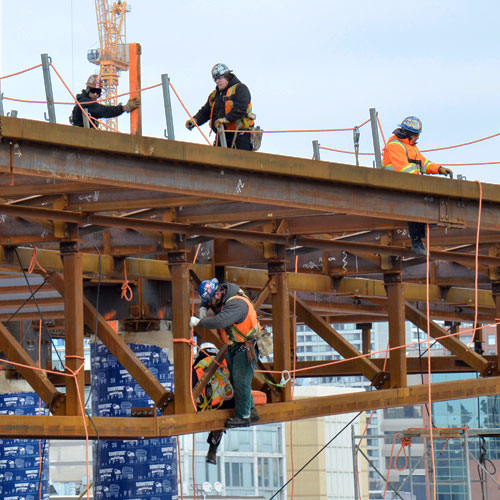