Walters is pleased to announce that we have been awarded the role of supplying the main structural box girder supporting the AESS ribs and façade for Cadillac Fairview’s new Toronto Eaton Centre (TEC) Pedestrian Bridge.

The specialty of this project is not only the complex design but also the sophisticated installation at Toronto’s biggest shopping mall. Our scope includes modelling, detailing, fabricating and installing the vertical and torsional cambered box girder on James Street (temporary condition), which will form the primary structural component of the new TEC Bridge over Queen Street, located downtown Toronto.

We were responsible for fully modelling a cambered profile to accommodate and control deflection of the bridge under its own weight when complete. Fabrication of the 95 tonne box girder began in Jan 2017 and was completed on schedule in early May 2017.

Walters was also responsible for ensuring safe shipment to site and secured the numerous permits required to approve such a massive shipment between two cities and using major highway routes. The 95 tonne assembly left our Stoney Creek, Ontario plant at 8:00pm on May 10th, arriving on site a mere three hours later in downtown Toronto. Due to the size, the shipment was accompanied by private escort vehicles and police vehicles were also placed at the front and the rear of the shipment for additional assistance.

Prior to the delivery, Walters Field Services had mobilized two large mobile cranes for the offloading operation. The box girder was lifted with both cranes acting in unison. In the early hours of May 11th, the box girder was successfully unloaded and placed atop two temporary support towers on James Street, a side street close to the two buildings which are to be connected. These support towers were specifically designed to emulate the final condition of the bridge.

The bridge will remain on James Street for approximately two months allowing all the various trades to complete the complex façade. Upon completion, it will then be raised hydraulically and transported to its final position for installation around the corner on Queen Street, where it will then serve the millions of shoppers that pass between Hudson’s Bay, Saks Fifth Avenue and the Eaton Centre every year.

To view the spectacular journey of the 165 foot long, 13 foot wide and 13.6 foot high shipment that weighs an astounding 271,169 pounds, please click the video below! 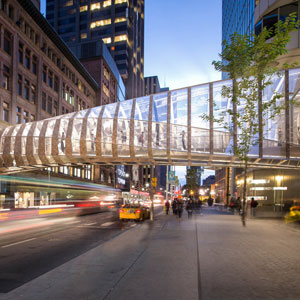