On February 23rd, Walters was recognized for achieving an excellent injury/frequency score for 2014/2015 at Hamilton Halton Construction Association’s 96th Annual General Meeting and was presented with the 2017 Health & Safety Achievement Award. This recognition level has been sustained from the previous 2013/2014 scoring.

This Safety Award recognizes the work and efforts put forth by the Walters Field Services crews and their focus on getting the job done right; efficiently and skillfully. A great amount of effort that goes into executing a project, from the design and fabrication, to the final erection on the project site. Throughout the entire process, we always make safe execution an absolute priority.

From fall arrest holes being ‘detailed’ in, to equipment inspection and certification during mobilization, to the use of safe work practices and procedures, inspections and hazard reporting, our safety practices are built-in from the ground-up. The entire Walters team takes our role in protecting ourselves and protecting each other very seriously.

“The award is a testament to the commitment to working safely by everybody that works at Walters” stated Brad DeBoer, Health and Safety Manager. 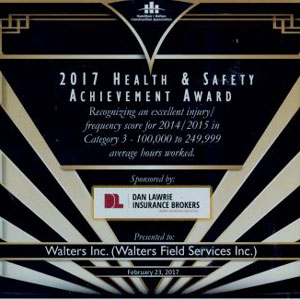