Last week was a momentous occasion for representatives from Irving Shipbuilding, EllisDon, Ironworkers Local 752, Hatch Mott MacDonald, and Walters Group’s employees. Together, we celebrated the installation of the last steel truss on Irving Shipbuilding’s new Production Building. Walters role in this exciting project has been to supply, fabricate and erect 9,000 tons of structural steel and a metal deck.

The truss, which was signed by members of Ironworkers Local 752 as well as Walters Group employees, was lifted 47 metres and placed on top of the very north end of the new building.

Erection of the steel started in February 2014 and within a record five months, the forty five, 200 foot long span trusses have been lifted into place. Walters is pleased to have improved the project schedule as the work was initially slated to continue until December 2014.

Altogether, Halifax Shipyard’s new Assembly and Ultra Hall production facility will be more than four football fields long once completed. Canada’s new naval combat ships will be built in this facility starting in 2015.

Here are some highlights from that day: 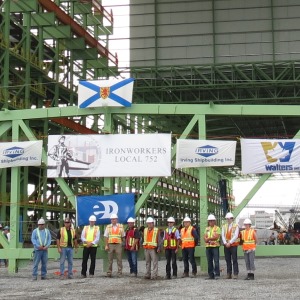 The American Dream Becomes a Reality