Walters Group recently had the pleasure of being a part of Hamilton’s leading news radio station, AM900 CHML, to participate in a discussion series called Putting Hamilton to Work. The premise of this series was to develop a dialogue around the employment landscape in the city of Hamilton, with focuses on both the current state of affairs, as well as the economic outlook for years to come.

Having been the first time AM900 hosted a radio series on this topic, Walters was delighted to have the opportunity to engage in this conversation that impacts the city’s workforce with Bill Kelly from The Bill Kelly Show.

During CHML’s Putting Hamilton to Work feature, Walters Group’s HR Manager Marty Verhey stated that there’s still a negative perception about skilled trades in society today. As a result, there is a real lack of skilled trades workers and it has become a national problem.

“Being in HR, you spend a lot of time at Career Fairs,” Verhey shared with Billy Kelly. “You see the mothers and the fathers pulling their children away from skilled trades booths because it’s considered the dirty shop where you’ve got to wear a set of coveralls. But the reality is, as technology advances, there are a lot of different opportunities and we need people with a lot of different skills as a part of our team. ”

Verhey pointed to the systematic closing of high school shop classes, or the subtle move of those classes into rural communities as part of the problem. The other part is the notion that universities are seen as the only educational opportunity that can offer a “real” education. This has lead to a deficit of skilled trade workers in a hungry manufacturing market nationwide, including Hamilton’s manufacturing industry. This negative perception of working in trades is something Walters continually strives to change through career fairs, shows and professional career development talks at universities and colleges.

“It takes commitment for companies like Walters to actually say ‘Yes, let’s invest in educational programs and partner up with high schools, colleges, and universities.’” Marty stated. “It’s work, it’s effort, it’s money, and it’s time, but it’s for a long-term result that will benefit those in skill trades programs looking for work after graduating and for the companies that hire them.”

Walters educational partnerships with Mohawk College for the past number of years highlights the commitment Walters has in cultivating the skill sets that Hamiltonians have for skilled trades work. The commitment to the city and to the industry is very strong – and continues to be so as Walters recently held a Career Fair on Sept 27th at its Hamilton headquarters. Over 200 applicants came to apply to various general labourer, machine operator, welder, and fitter roles. 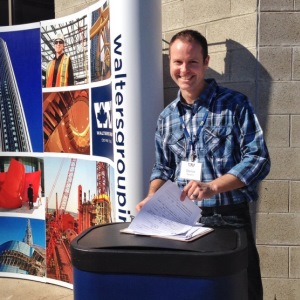 Architecture At The Next Level