During the topping off ceremony at Union Station, a small tree was strapped to the steel bar as it was being lifted into place. Many within the construction industry know the significance of this traditional gesture. However, if you are new to this customary tradition, you may be wondering why this is done.

The significance of the topping off ceremony is a meaningful one and an ancient construction tradition that dates back to the Vikings from Scandinavia. What is particularly interesting about this tradition is that it isn’t necessarily associated with the beginning or the end of construction. Rather, the ceremony is associated with the raising of a building’s highest beam or structural element – hence the name of the rite: the topping-off.

Having a tree strapped to the beam signifies a goodwill gesture of bringing life into the building and to provide a positive omen to everyone involved in the construction project. It is also considered a way to give blessings to those that will live or work inside the building after the construction process is complete. In some cases, the tree can also signify that no fatalities occurred during the entire time the building was underway. At Walters, safety is a top priority, so topping-off ceremonies hold significant importance for us.

Often, the beam is also adorned with company and association flags tied to it, along with Walters employees’ signatures and the initials of those involved with the construction project. This traditional practice remains common here in Canada, as well as in the United Kingdom, Germany, Austria, Czech Republic, Slovakia, Poland, and the United States. 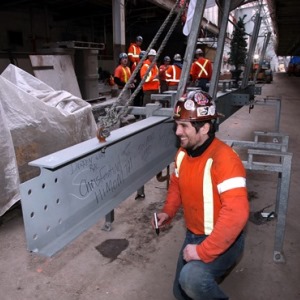